If Orange Marmalade Cake reminds you of the beloved Mitford book series by Jan Karon (& all the deliciously delightful visions of food therein : )  – guess what!?!  ‘Tis THAT cake… the one Father Tim adores (!) that Esther Bolick makes for every special occasion in Mitford…

And, yes, it has become a tradition for Virginia (your humble blogger who also doubles as the chief cook & bottle washer of the Woodward Home) to bake it at least once a year – either for Mama’s March 15th birthday or for Easter.

Of course, it’s easy getting sidetracked with Jan Karon’s beautiful “Mitford Cookbook & Kitchen Reader” (a true work of love!) – there are so many amazing recipes & lovely excerpts from her books…

…But, this year on Easter Sunday (after recovering from a midnight post-Easter-Vigil-Lent-is-over–chocolate-fest… & the subsequent chocolate hangover) the mixing process began well until the ‘add cake flour’ part.

Whilst making the pre-Easter grocery list, it was noted that an unopened box of cake flour resided on the top shelf in the pantry.  HOWEVER,  with the butter & sugar beating away in the mixer, upon retrieval the cake flour expiry date turned out to be 2007  (SIX YEARS OLD!?)

Old flour ’tis not good for any cake, much less super-special Marmalade Cake. What to do?  Quick thinking – to turn a two layer Marmalade into a three layer with WHITE LILY flour.  I have used White Lily for biscuits & muffins & cakes ever since dearest Mildred Tabor, one of my parents’ oldest friends (& the Best Pie Baker EVER from Columbia, South Carolina) told me about it eons ago.

..and ya know what, ya’ll? Mildred is SO right.  When i use other flour in my biscuits, you can TELL.  It makes a HUGE difference (!!!!!) so i stock up at our local Food Lion since other groceries here don’t carry the southern staple White Lily… (that this is Virginia, the STATE of, you’d think other grocery chains would catch on…)

Still, ’tis a bit tricky using White Lily for such a fine cake — but by making a three layer  (definitely cutting out the baking powder) & making a few wee adjustments (see the p.s. & recipe link) … the Marmalade Cake turned out JUST FINE. 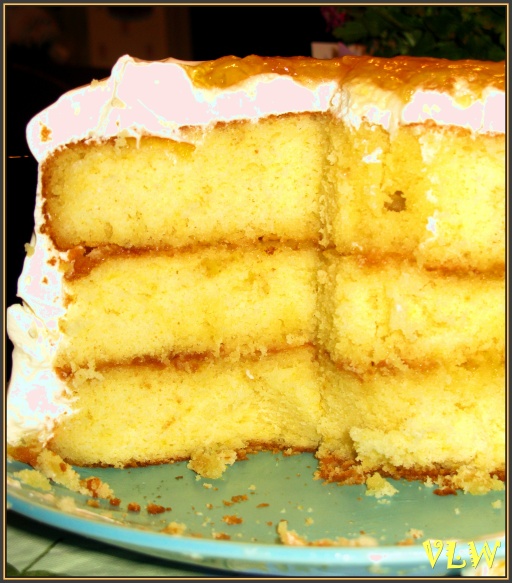 Definitely a ‘Hallelujah’ cake… (once you get a taste, it’s easy to start singing) … & thus totally appropriate for Easter (or special occasions, birthdays or to celebrate Spring!)

The Marmalade Cake ’twas a bit decimated after dinner.  Altho quite a big cake (especially the three layer)  it didn’t last long, at ‘tall :  )  (of course, such a cake can be carefully shared as big slices on large paper plates covered nicely with bright Glad wrap…)

….& if you haven’t read Jan Karon’s books, you are in for a delightful treat getting to know Father Tim,  Cynthia, Dooley, Puny, Miss Sadie, Louella …& the host of  other Mitford characters who will become your friends. Trust me on this one – very good friends.

Start at the beginning with “At Home in Mitford” ….or if you’re an old Mitford fan, be sure not to miss Father Tim’s latest adventure with Cynthia in Ireland that turns into a mystery:  “In the Company of Others.”

But, of course, check out the beautiful Mitford Cookbook & Kitchen Reader

What i also love about Jan Karon is her courageous launch into writing.  Leaving a successful advertising career, years ago she moved lock-stock & barrel from a big West Coast city to Blowing Rock, a small town in the hills of North Carolina — to pursue her dream of writing books.  But she had no inspiration. The pickings were getting kinda slim as the economy took a downturn & her savings dwindled (in her cookbook she says she learned how to cook the roast chicken bones into a big pot of soup to make it stretch.)

She writes:  “I had stepped out on faith to a new life of writing books, but discovered I knew nothing at all about writing books, the money wasn’t coming in, and the bills were piling up. Woman’s dream turns into nightmare?”

During those trying times in ‘the valley’, however, Jan Karon’s faith deepened… & when inspiration came she persevered …& persevered …

And, now there are 16+ of her wonderful books, all BESTSELLERS, to enjoy.

Caught by a Thought:

“If God has given you a dream, you’d better get cracking because He wants you to use it.  That’s why He gives them to us in the first place.”    Jan Karon

To make this into a Three-Layer (with White Lily Flour) – lose the Baking Powder… use 3 1/4 cups flour, 2 & 2/3 cups sugar, 5 eggs, 2/3 cups vegetable oil (safflower has no cholesterol) – add oil after the eggs & beat for one minute before adding the buttermilk mixture … bake the 3 layers for 35 minutes & then double the marmalade & double the sour cream/ whipped cream mixture (it makes for a  fluffy delicious topping- you will want MORE!)