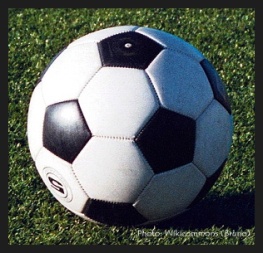 National teams are kicking their way into the World Cup Quarter & Semi-Finals.  For my (sometimes uneducated) American buddies, just making it from regional play into the tournament of 32 teams is HUGE. To keep going to the knockout stage (especially when placed in “Groups of Death” with globally top-rated teams)  also marks a HUGE achievement.

So, it’s just a game. Football (as most of the world calls it.) 22 players kickin’ it for 90 minutes. What’s up with a tournament the whole world stops to watch every four years?

On the day, the best team wins. ‘Best’ for the World Cup, however, does not necessarily mean ‘highest ranked’ or ‘most professionally qualified’ or having the ‘best-player in the world.’  Sure, that helps. But, case in point, Spain & Portugal are out. REALLY early.

Sometimes teams have to bite the bullet (& not other players shoulders!)  The U.S. had a tough group draw: Germany, Portugal & Ghana (who knocked us out in the last 2 tournaments!!)  It seemed impossible for the U.S. team to get out of group play (especially after watching Ghana’s fiery play against Germany – how the heck did the U.S. beat them that 1st game?)

Life can be like a Football match. We try & try to reach our goals, but miss.  Like the U.S. last week gritting it out against Germany in the pouring rain, down one goal into the last minute(s), Clint Dempsey struggled with several last attempts on goal & then his header missed.  Match over. Germany won.

When we miss our goals & jumble our life grooves, do we give up?

Reminds me of a favorite scene from the movie Chariots of Fire after Eric Liddell beats Harold Abrahams in their first race.  A frustrated Harold tells Sybil, “if I can’t win, I won’t run.”  But Sybil replies, “If you don’t run, you can’t win.”

We’ve got to put ourselves out there if we want to reach our goals. We can’t sit on the sidelines of our lives and expect to achieve …anything.

Sometimes we might want to just quit.  Yesterday Costa Rica forward Joel Campbell looked so tired after playing a man down most of the match against Greece — then it went into overtime.  He looked like what I felt doing the night-monitoring grooves for my Papa. So #@%#@ tired. But he stayed on the field until the end when Costa Rica eventually won on penalty kicks.

Sometimes our best life grooves involve just ‘hanging in there.’  Showing up each day, praying for the grace to meet each challenge as it arises. Being faithful (even if we’re so bone tired achieving anything seems impossible.)

Getting help, also helps. Like, we need each other. Football is a team sport – it (almost always) takes good teamwork setting up a goal. There have been some amazing plays this World Cup, but Swiss player Xherdan Shaqiri totally wowed me over with his 3 goals against Honduras. Immediately after scoring he pointedly gave credit to his teammates who set him up so beautifully.  Teamwork at its best.

Sometimes, unlike Shaqiri, we can’t see those around us, willing (& available) to assist our life grooves.  Maybe we need to sit back, look around & go at it (whatever ‘it’ may be) with help from others – making new grooves TOGETHER.

Developing good life grooves (the kind that see us through) can be tough, especially as in the World Cup when the game gets rough & the going gets gritty.  There are times, however, when everything clicks. When God-given talents are blessed for all to see.

James Rodriguez scored the most amazing goal in the Columbia knock-out match against Uruguay. Trapping the ball with his upper body in one smooth move he kicked the ball in from 20 yards. Stunning. Unbelievably amazing. What a moment to savor. … & his smile lit up the stadium. Can’t wait to see him play against Brazil.

Like favorite author Terry Pratchett said, it’s not just about Football. How these teams play, matters. How we choose to play our individual life grooves, it matters.

After losing to the French today, Nigerian coach Stephen Keshi responded to questions about the future of his team, “Anything is possible, if they play for their hearts’ desire.”

Back to Chariots of Fire.  In defeat Harold Abrahams asks Sybil, “after all that work, what do I aim for?”  She challenges him:  “Beating him the next time.”

Whether our teams win or lose, we can take away these World Cup lessons into our life grooves.  Hopefully, there will be a next time when we can play for our hearts’ desires.

p.s. It’s amazing how Football/Soccer can be used to bring folks together – even refugees.

Check out this previous post on an inspirational initiative: Outcasts United.