Roses in the Rubble

Easter is a few weeks away & Virginia the blogger has been AWOL most of Lent. Not much chance for the post-a-day Lenten gig of previous years, but there’s still time to offer a few bits for reflection. Psalm 27:1&4 are precious verses written in the indelible ink of God’s love across my heart and life. This morning when Msgr. Keeney challenged us every day to pray, “Lord be my strength,” (after he explained about God being our Light), these verses came to mind. I remembered how they influenced these words written years ago when starting this blog & why I chose the name Roses in the Rubble… 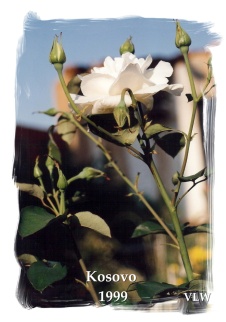 As a relief & development worker I documented some sobering issues – child victims of war, ravages of HIV/AIDS, and injustice (mass graves inclusive) in conflict zones & places of poverty all over the world. After collecting flower photographs during my first posting in the Middle East, what began as a hobby (making cards out of flower pics) became something more, especially during the Kosovo relief program. Finding roses in the rubble and capturing them on film. Finding beauty – HOPE – in a disaster zone.

I love flowers – our Creator’s heavenly paintbrush splashing beauty around us. In Africa beautiful jacaranda trees lined a street near our main office. During the month of December when lavender flowers canopied in giant trees fluttered everywhere, it reminded me of elven Lothlorien in Tolkien’s Lord of the Rings. When I went on (& on) about the beauty of these trees, my African boss said, “the flowers mess up your windshield & make a mess all over your car!”

But, hey, they were a beautiful, inspiring mess!

Sometimes our lives are filled with messy mistakes, failures and piles of rubble. But the thing about finding roses in rubble, you have to look for them. Sometimes they’re hiding behind our fears, insecurities, anger and bitterness. But God can do the impossible & is rather good at bringing good out of impossibly challenging circumstances.

Think of Joseph, thrown down a well and sold into slavery by his MEAN brothers. Never say it can’t get worse: he ended up in the rubble of an Egyptian prison (they are notoriously bad now – imagine what it must have been like 5,000 or so years ago?)  Keeping the faith, however, years later he became the second most powerful man in Egypt and saved not only Jacob & his family but the whole region from starvation. Joseph became a powerfully strong rose amidst debilitating, devastating rubble. As he later told his brothers, “what you meant for evil, God used for good.”

I know that God has grown roses out of my personal rubble in impossible-to-comprehend ways and those around me (especially my bed-fast quadriplegic Papa!) I’ve also met many roses living in the rubble of conflict-zones who reflect the beauty of hope to shattered hearts and broken dreams around them. Their scarred blooms are filled with petals of faith, hope, peace and love as they exude the bitter-to-sweet scent of joy amidst suffering.

Living roses inspire us to be more of who we are meant to be: beloved sons and daughters of an Almighty Heavenly Father. Regardless of whether we are pink, purple, red or yellow: we all come from the same human stem of life created in God’s image.

If you are bogged down looking at the rubble around you. Heads up! Look around…the sun still rises & the sun still sets (keeping those Heavenly paintbrushes busy.) If God clothes the flowers of the field so beautifully, will God not take care of us? Have faith and COURAGE.

It takes courage to be a rose when rubble surrounds you!

“The Lord is my Light and my Salvation, whom shall I fear? The Lord is the strength of my life, of whom shall I be afraid? One thing I desire, and that I will seek after: to behold the beauty of the Lord and inquire in His temple.”  Psalm 27:1&4

3 Responses to Roses in the Rubble