Celebrating the feast of Christ the King yesterday reminded me of the powerful movie “For Greater Glory.” After watching it in the theater six years ago, the following Christmas I gifted DVD copies to my entire family. As we prepare for the coming of Advent next Sunday, it’s a good reminder that often faith requires sacrifice. 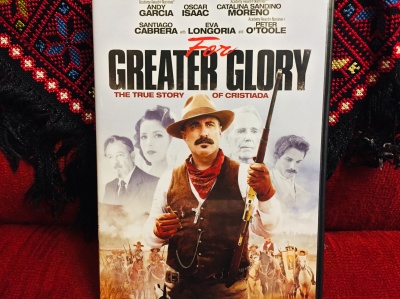 Inspiration permeates this thought-provoking true story about religious freedom in Mexico during the 1920s regime of President Plutarco Calles. Beautifully crafted, well acted with an amazing cast, this is the kind of movie that stays with you awhile.

This epic creatively intertwines historic civic struggle against oppression with the transformation stories of two central figures: a little boy and a great general.

The movie opens as young José Luis Sánchez del Rio (Mauricio Kuri) throws rotten fruit at an elderly village priest. Caught in the act, his uncle the mayor makes him help Father Christopher around the church. As José experiences Father Christopher’s faith in God and in him (even though he is quite a little hoodlum Father Christopher asks him to become an altar boy) José begins to change.

“Who are you if you don’t stand up for what you believe?”

“Who are you if you don’t stand up for what you believe?”

Andy Garcia gives an amazing performance as General Enrique Gorostieta Velarde, a retired general renown for successful battle strategies who is called upon to serve the Cristero movement that rose up in revolt against President Calles’ (Ruben Blades) repressive anti-faith laws and oppressive measures. Even though his wife Tulita (Eva Longoria) is devout, General Velarde is an atheist. He does, however, believe in freedom (and may be a little bored running his soap factory) so he accepts the task of unifying the scattered resistance and leading them into a cohesive fighting force.

He finds leadership must be earned among the rough and ready bandito-ish fighters.

“Freedom is not just for writers and fancy documents, but for our homes, our families, and our lives.”

In the process General Velarde is transformed as he sees the faith of those around him, especially José who he comes to love like a son. As he struggles with faith, “I don’t know where to find it.” One devout lady responds, “if your heart is open it will find you.”

Rated R for battle sequences and violence (not nearly as gory as Braveheart or The Patriot) this movie also chronicles the heroic efforts of the Cristero movement leadership and the sacrificial participation of so many individuals from all levels of Mexican society. Women played a crucial role, priests provided spiritual support (and in some cases military support), villagers provided food and shelter, lawyers drafted civil plans: all choosing to stand up for what they believed at great sacrifice.

I knew very little of this period in Mexico’s history except for a favorite book by Graham Greene, The Power & The Glory (set at the same time), but this is quite an education of unsung heroes who fought (and died) bravely for freedom and faith.