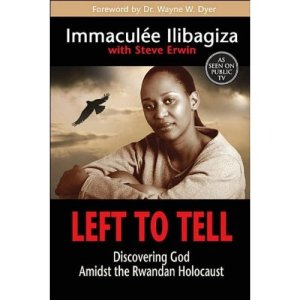 I read this AMAZING book several years ago & keep giving copies away (we’ll see how long the current edition stays on VA’s shelf!!)  Immaculée’s powerful testament of courage, faith and forgiveness amidst the horrifying Rwandan Holocaust of 1994 is truly extraordinary, inspiring, and almost impossible without faith to believe.

But Led by Faith (the title of her second book which is also amazing!), Immaculée survived when ethnic violence claimed almost 1 million in her country.  How she survived, however, is where Faith (with a capital ‘F’) comes in – her faith & the faith of others like Pastor Murinzi who hides Immaculée & five other women in a tiny bathroom as Tutsis & Hutus (who help Tutsis) are butchered all around them.

For three months they live under extreme conditions of terror and silence (even the Pastor’s family doesn’t know about them) as gangs of machete-wielding killers repeatedly search the house and surrounding areas to find them.  Immaculée’s faith grows in the silence, however, as she prays, and prays, and prays some more, coming to know God – the God of Love – in a deeper way.

Impossible to believe in the middle of genocide, but Immaculee survives, and – “Left to Tell” – she poignantly shares how hiding in that bathroom she comes to know she must forgive those who killed her beloved father, mother and brothers…

Beautifully co-written by Steve Erwin, this book draws you in from page one. It’s hard to put down as you meet Immaculée’s beautiful family, experience the world through her eyes as she grows up, studies hard and makes it into university – such an honor – before the insanity of inhumanity begins around her.

Not many of us (thank GOD!) will ever experience the horrors Immaculée faced, but I hope her example of courageous faith will inspire you – as it has me- to FORGIVE  (sometimes even the little stuff is hard…) letting the impossible become possible as conduits of God’s miraculous grace & mercy.

In Immaculée’s 2nd book, Led by Faith, also co-written by Steve Irwin, her faith continues to be tested in the aftermath of the genocide as she finds work with the U.N. in Kigali & eventually makes her way to the U.N. in New York… encountering many interesting people (some good, some bad) while meeting each new challenge with courageous faith.

There’s also “The Diary of Immaculée” – a short DVD documenting her return to Rwanda years after the genocide, visiting places in the book, meeting up with survivors and those who helped her. Very powerful…  and more recently, I read her beautifully written Our Lady of Kibeho – amazing..

p.s. if we had “Roses in the Rubble” awards, Immaculee would certainly win a top prize!  To learn more about her current comings & goings, check out her website —