After hibernating a bit in its Netflix envelope, last week this documentary made its way onto our TV screen for what was meant to be a partial dinner viewing, but our dinner plates remained un-cleared as we sat completely riveted until the last credit rolled.  What an amazing story of the courageous change-agents who influenced Estonia’s emergence from communism – without a single drop of bloodshed.  And, yes, SINGING played a major role culturally AND politically.

Who’d a thought(!) singing as a force for change? for a WHOLE COUNTRY? But these Estonians, they are seriously into singing & have been for eons.  Imagine an annual music festival with 20,000 participants, all singing together, taking on Soviet era rules against nationalistic songs: individual courage + collective courage = courage that influenced change!

A confession: I didn’t know a whole lot about Estonia before watching this documentary, just that it’s a former Soviet country near Lithuania & Latvia along the Baltic Sea. Now, however,  it would be grand sometime to visit this beautiful place of amazing people who persevered through so many hardships yet maintained their cultural heritage, weaving it together with their desire to be FREE.

The documentary blends the history of the music festival with the horrific challenges of the first Soviet takeover (after the country had brief independence in 1918), the German occupation of WWII & the subsequent return of the Soviets.  So many families suffered prison camp deaths & sentences to Siberia … for a long time Estonians shared their heritage and desire for freedom in extreme secrecy while some, like the Forest Brothers, took their fight against the communists into the woods.

But what struck me watching the end notes about the interviewees – during the extremely dangerous ‘revolution,’ it was the Supreme Council comprised of Estonian communists who courageously declared independence from the Soviet Union while the masses gathered to SING and stand between Soviet tanks and their capitol buildings. 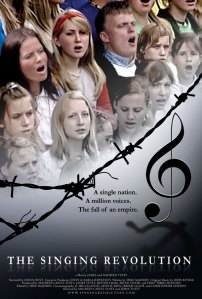 Incredibly inspiring movie, like I said: RIVETING (not what you expect from a documentary!) And the music. wow. Truly, truly glorious… interspersed beautifully throughout from the first scene through to the credits.

Music IS the international language of the heart.. and Estonia, may the rest of the world learn from your courageous example!

This entry was posted in Advocacy Issues, MOVIES !!, Music and tagged communism, documentaries, Estonia, roses in the rubble, singing for change, The Singing Revolution. Bookmark the permalink.

2 Responses to ESTONIA & “The Singing Revolution”