In a super-hero movie, really? Truth, love & compassion? But Wonder Woman is not like the recent string of DC Comic films, it’s altogether something better. This adventure is about story, a good story (& yes, our hero kicks some serious butt along the way.) As she journeys into the world of mankind, we journey with her.

Wonder Woman has come a long way. She has a cool new uniform (can’t believe scuttlebutt about it. Compared to Lynda Carter’s outfit? Way tame!) We finally get her back story (one of the best parts of the film) and she has her own movie. Lots to celebrate. 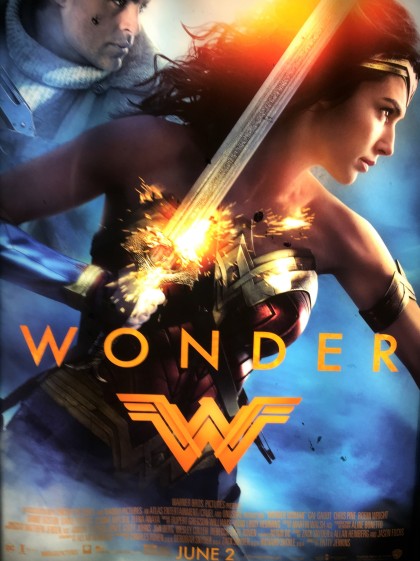 Last night my brother & I saw an advance screening for which we plotted & planned. Watching Wonder Woman on TV was part & parcel of my childhood growing up in the 1970s. Along with the Bionic Woman, these strong women characters sent young girls like me a message: you are powerful.

A whole row of young girls sat with their mothers in front of us last nite, all wearing Wonder Woman t-shirts (mothers inclusive.) Chatting with them, they also plotted & planned eons in advance. We high-fived: GIRL POWER!

Wonder Woman delivers the message that girls can become powerful, super powerful, in a touching way. As the story opens Diana is a little girl growing up on a sheltered island of Amazon warriors. Her mother Hippolyta (Connie Nielsen) grapples with coddling her vs. her aunt, General Antiope (Robin Wright), who trains her mercilessly.

When Steve Trevor (Chris Pine) crashes into this ancient island world, he brings the horrors of World War I into the mix…and the story takes Diana from the security of all that she has known into a world at war.

Along the way there’s humor, compassion, friendship, love, and the quest for truth as Diana comes into her power and her place as a super-hero. It’s not clear-cut, as life (& often war) isn’t. That’s what makes this an engaging story, it takes time to build and draws us in. Kudos to director Patty Jenkins for making a great movie!

I liked Gal Gadot in the Fast & Furious movies. As Diana she shines with sassy curiosity, compassion and a big heart finding her way in a world gone mad. Gal is an Israeli actress. Although her Czech grandfather survived a concentration camp during the Holocaust, his whole family was killed. She said, “My grandpa taught me there is NO wrong religion. No wrong color. And no wrong race. I was taught to love all people for what their heart is. Light should always beat darkness as love should always beat hatred.” Before he passed he told her, “No matter how dark your life, you need to find your inner light.”

Just like she does as Diana in this blockbuster Wonder Woman movie.