With all the negative harassment-in-the-workplace stories out there, I feel blessed to have worked with amazing male leaders who empowered me to be the best me I could be. Who became mentors and remained treasured friends long after our respective work opportunities took us to other places.

None more so than Bill Warnock. It’s hard to measure his impact in my life – not just the 26 years we’ve known each other, but the depth of all he taught me, how he lived his life brimming with faith-filled courage, how he was there at important junctures in my life with wisdom, advice, encouragement and friendship.

When I received news that he died Wednesday, it felt like a punch in the gut.

I knew Bill had health challenges. A year or so ago he called the day before cancer surgery, but it seemed like he made a complete recovery and all was well. From Facebook comments he was meant to be on a trip to Ireland this week.

That sounds like him, always living life to the fullest.

After my Papa passed a few years ago, Bill visited us here in Williamsburg for a few days before zooming up to celebrate Thanksgiving with friends in Washington, D.C. Although he retired awhile back, he was always traveling, off doing interesting things, keeping up with everyone and what’s what.

Years ago when my brother and I visited him in West Yellowstone, MT, we nicknamed Bill (& his cohort of geyser enthusiasts) “Geyserbusters” (like Ghostbusters) because they communicated in code via fancy gadgets when geysers in Yellowstone were ready to blow, then scrambled to see them spew forth their watery majesty.

As a voice for the voiceless, Bill could sometimes be like a bull in a china shop, but one filled with love for the oppressed, for justice. He gave and gave of his life helping others – in the Middle East, Bosnia and all over the world.

If I had not met Bill during a Holy Land pilgrimage trip in 1992, my life would be so different, so dull! At the request of mutual friends in Washington, DC, he took me to visit several community development and medical projects in West Bank villages. After seeing the effects of injustice, especially on Palestinian children, I observed that someone needed to help do more advocacy for them in D.C. Bill looked me right in the eye, “I need someone to help me here. And that person could be YOU.”

I explained my deal with God that after years of working in D.C. non-profits, transitioning to the corporate sector was The Plan. Bill’s insistent response: “Pray about it.”

After praying (about praying about it) six months later I returned to the Middle East working for a faith-based relief & development organization with Bill in an all-embracing job encompassing advocacy, communications, public relations and reconciliation.

One year there became 5 years, then 10 years and more of globetrotting in challenging places as a relief & development worker.

Bill led our team through tough times of conflict crises (too many of those) and hope-filled times when peace in the region seemed attainable. In the West Bank & Gaza Strip we had a good reputation because we helped everyone no matter what political faction or religious affiliation.

He mentored me in so many ways, not just about long-term transformational community development (of which he knew a great deal from previous globetrotting positions) but about how we do what we do. People matter.

For Bill it wasn’t just about funding (although he expertly wheeled & dealed to make that happen), but about building bridges of relationships – with government donors and project partners, team members and local communities, the media, other NGOs, religious entities, visitors and everyone we encountered. 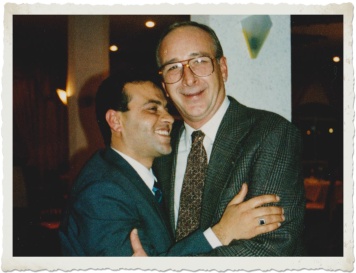 Bill with Yasser, our Gaza Manager

He never missed an opportunity to build bridges of hope and love, even when despair permeated the air of conflict zones.

He also had a high bar for excellence that pushed us to do (& be) our best.

He had a heart that hurt for the hurting, and a loud voice that made sure the world would know about lopsided injustices oppressing others.

Bill had a sense of humor that diffused awkward situations (& sometimes, ME!) When this fiery redhead irately tiraded on about something or other, he told me, “Go stand in front of the fan!” Sure, it was hot as fireballs outside, but it made me laugh that Bill meant me to go cool off (inside) since so many things were out of our control.

It became a joke, of sorts, when he’d notice the onset of seething, he’d say, “Go stand in front of the fan.” We’d laugh, then try to find our flexibility grooves (from Plan A, B, C – to K?)

Bill wore his faith, straight up. The kind of faith like Jesus overturning the tables of those overpriced sellers in the temple who preyed upon the poor, yet compassionately reaching out with love to the unloved, the hurting and oppressed.

After 10 years in the Palestinian/Israeli conflict zone, Bill left in 1997 to lead the massive Bosnia program. Out of the frying pan, into the fire. When I passed through Sarajevo in the summer of 1999 for a short consulting project, I saw Bill continuing his relationship strategy – but on a much larger scale in that complex context.

Bill retired from Bosnia to the log cabin dream home he built in Montana, located just a few miles from Yellowstone Park. (In the Middle East he would pour over log catalogs asking, “what do you think of this one?” Like this city chick knew anything about logs!) He didn’t sit still there very long, taking up a consulting gig that sent him all over the world training troops headed for peacekeeping assignments.

Bill hobnobbed with generals, government leaders, community leaders, donors, media, educators, church representatives, and the poorest of the poor – all with equal respect and rapport that said: you are important to me, because you are beloved of God.

In between assignments he continued geyserbusting, visiting friends, hosting myriad visitors in his glorious log cabin, skiing, traveling (the kind of trips where you learn things), and remained very involved in his local church.

Bill loved his family. His parents, Mama Peg & Papa Bill, came in their 70s to visit us in the Middle East – more than once. He loved his brothers & sisters, his nieces and nephews (of whom he proudly spoke, often.) He loved his hometown of Loveland, CO.

Bill will be missed by hundreds and thousands of the lives he touched, by his colleagues, friends, family, and by me.

Lives of great men all remind us
We can make our lives sublime,
And, departing, leave behind us
Footprints on the sands of time…

Let us, then, be up and doing,
With a heart for any fate;
Still achieving, still pursuing,
Learn to labor and to wait.

Rest in Peace, Sa’id Bill. God be with you in all eternity.