Freddie the Frog does Christmas

On this last Sunday in Advent here’s a post written in 2014 about my Papa not long after he passed – it’s still a message of hope for increasing our faith to cope.

Let me introduce you to Freddie the Frog… 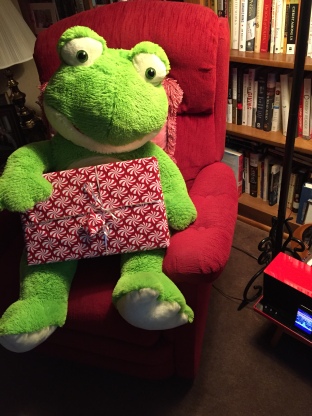 Freddie is soft, big, and green – a cuddly buddy. The kind of friend Virginia likes to have about. But, he was actually my Papa’s.

There is a good reason.

Three weeks before Papa died I saw Freddie in the pharmacy whilst picking up Papa’s meds. After leaving the store, I went back in to get him after thinking about how he would make my worn out Papa smile. He did. Many times. 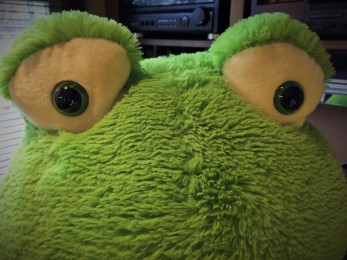 Freddie has these eyes that cut over to you (kind of like Papa’s did.)  I would put him in Papa’s line of sight next to his hospital bed in the living room. Peeking around the corner to check on Papa, I would see him cut his eyes to Freddie and then smile.

Big smiles, with a hint of chuckle.  No small feat when Papa had been incessantly sick since the beginning of January.

Here’s the thing, we have a history with frogs. When Mama and Papa called every week while I worked in Tanzania, they could hear frogs croaking loudly through several thousand miles of phone waves. Papa said that when they got on my nerves (late at night trying to sleep) to remember F–R–O–G:  Full. Reliance. On.  God.

Methinks Freddie helped him during his final sickness, not just with his funky eyes, but as a reminder of what my Papa was all about: doing and being the impossible for God. Papa lived over 25 years with a debilitating disease but didn’t let it stop him from believing and relying on God each and every day. 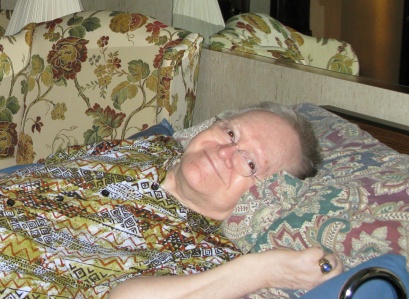 To me, Papa’s 4 Spiritual Secrets sum up what Mary believed when the Angel Gabriel brought the message of Christ’s birth to her:

Nothing is impossible with God.

Here are Papa’s secrets, based on Jesus’ teaching in John 15 about the Vine and branches:

I didn’t, but He did.
Because I was in Him and He was in me.

How we miss Papa, especially at this time of year he so enjoyed. His vibrant spirit centered our celebrations and his presence made our presents to each other all the more meaningful. There’s a big hole in our hearts, but it’s overflowing with the love Papa instilled in us and shared in so many ways.

The love of Jesus Christ Who comforts, trusts, believes, heals and lifts our spirits with joy that doesn’t always make sense, but is and does grace and joy.

One December morning as Mama and I listened to Andrea Bocelli sing “I’m Dreaming of a White Christmas” (from his My Christmas CD), she spoke out the words of the refrain, “just like the ones I used to know.”

Maybe this Christmas will not be like the ones we used to know, but we have Papa’s memory, his love in our hearts, and … 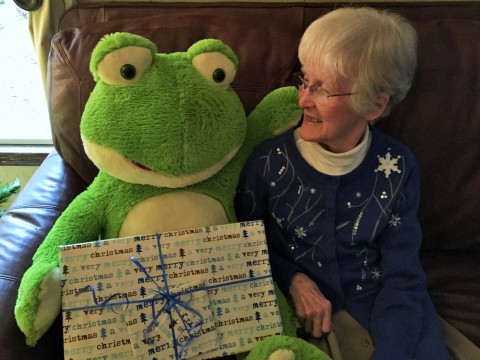 Hanging out with Freddie, we will remember to have F.R.O.G. faith and think of Papa cutting his eyes at him and smiling (and Mama smiling here, too.)

9 Responses to Freddie the Frog does Christmas