The other night Virginia the Cook spent two hours making a special dinner for her brother. Dusting off a favorite cornbread recipe she handily attacked the rest of the menu.

Sopa Paraguaya cornbread has sautéed onions in it, yum!

But, as things came down to the wire it seemed like a cooking show gone berserk. Burned bits of food, soggy cabbage, and the rice cooker (after an hour?) didn’t cook the rice properly. Everything but the cornbread tasted HORRIBLE.

To say the meal flopped is an understatement.

Cooking her way around the kitchen for a (very) long time, Virginia’s concoctions are usually on the tastier side of things. But this was a Failure with a capital “F.” As my brother bravely tried to eat what he could on his plate, I expressed my dismayed disappointment with bummed out vibes.

Dwight’s encouraging hilarity saved the day. He said, “Don’t look back on this food fiasco, look forward to REDEMPTION CHILI!” Earlier that day I told him chili would be on our menu the next night.

We started laughing. So, the meal was terrible, but I needed to leave the burned bits behind and focus forward. (After opening windows to get burned smell out of the house!) 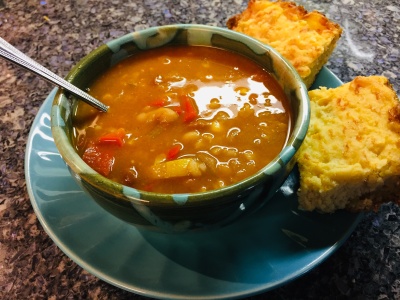 The next night Virginia’s Redemption Chili turned out just fine and tasted great with leftover cornbread.

So, Virginia, how do food fiascoes and chili relate to Lent?

God can take our fiascos and transform them into motivation for the next thing. The point is to keep trying, to not let failure spiral us with inhibiting fear into a state of inertia.

When we fail that’s the part that takes heaps of courage: to try again. Yes, it may take a few tries. Fear says, “You’ll fail again.” But courage says, “You’ll never succeed unless you try.” And, courage keeps trying – with Help from Above! 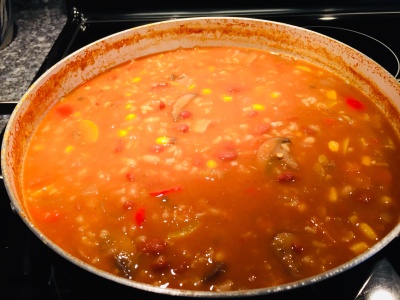 “Yes, failure is painful, but without pain there is no living in love. So then, go through the arches of Christ’s pain and enter into the joy of His heart. In the process, there will be many times you will fail. You will fall down flat on your face – even as He did on the way to the Cross. Unite yourself with Him and His passion and keep on going.”  Catherine Doherty