As we gear up for International Women’s Day on Thursday, i thought it would be great to highlight inspirational women this week.  And this AMAZINGLY INSPIRATIONAL MOVIE about Dr. Benjamin S. Carson (one of the finest Brain Surgeons In The World) totally fits…

ok, ok, so Dr. Ben’s a GUY (!) but the movie highlights the Very Important Role his mother made that made his eventual success possible (with lots of help from God.) Three Cheers for our Mothers!! and for Sonya Carson, played outstandingly well in this movie by Kimberly Elise, who pushes her son (with lots of Love) to overcome obstacles of all shapes & sizes even as she battles her own challenges.

This is a True Story.  Struggling to make it in Detroit, Sonya looks after Ben & his brother by cleaning homes and scraping pennies every which way she can after her husband leaves them with no support.  Although she can’t read, she pushes her boys to study, to see more than the poverty around them – opening their minds to possibilities vs. the stereotyped roles of African Americans in the 1960s.   As she cleans the homes of wealthy familes, she notices they don’t watch TV, so she limits television (2 shows only on weekends – how those boys Pout!) but she holds her ground & takes them to the Library where she introduces them to Books: they must read TWO each week AND give her a written report.

Despite setbacks (like being labeled ‘Dummy’ in his elementary class), racial injustice & prejudice, Ben excels (after he reads lots of those books and begins applying himself) over his white classmates causing No Small Stir.  During an assembly as he is called up to receive an award for the best academic student in 8th grade, his white teacher gives him the award – then berates the white children & their parents for “not doing better than this coloured boy.” (She really needed someone to SLAP HER) but no one does or says anything.

Grrrrrrr.  But Ben & his mother don’t let that stop them as she continues to affirm him – ‘You CAN do this… God has given you a Brain” …nudging & pushing & loving him through tough times as he makes his way to Yale, then Medical School, then to Johns Hopkins where he becomes the youngest head of of Pediatric Neurosurgery EVER. 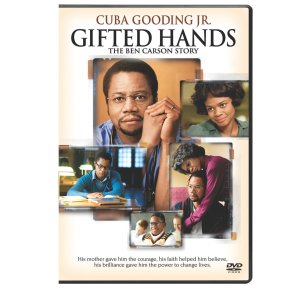 If you like ER, House or hospital shows, you will love this drama as Dr. Ben Carson – played brilliantly by Cuba Gooding Jr. – tackles the most complicated surgeries (separating conjoined twins etc.) with faith & GIFTED HANDS… after the gifted hands & heart of his mother Sonya Carson provided a foundation of perseverance to do what God called him to do.

Highly recommend this movie AND there’s also a book (by Gregg Lewis & Deborah Shaw Lewis) that goes into more detail.

p.s. the real Dr. Carson & his wife, Candy, have set up an academic scholarship program that awards excellence from elementary school onwards.. here’s a link to check it out: