Here in Virginia our hearts are wobbling after senseless bigoted violence pounded the city of Charlottesville. Nestled in beautiful Shenandoah and Blue Ridge Appalachian mountains, this is where Thomas Jefferson founded the University of Virginia. I spent four years as an undergrad @ UVA where everyone is welcome: the best and brightest from our state, country and around the world. The only challenge I had with my African American first year roommate: guys were extra nice to me to meet her because she was so very beautiful! (Then she would introduce them to her fiancé’s picture on the wall.)  🙂 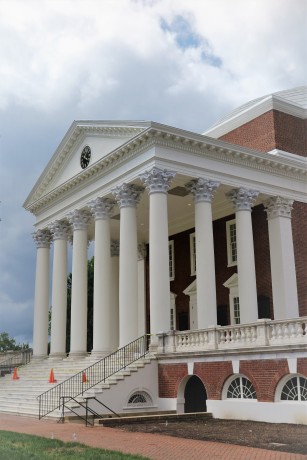 An open environment of diversity and multicultural learning make what happened in Charlottesville so hard to fathom. White nationalist extremists wrecked horrifying havoc in this peaceful university town with bigotry, racism, hatred and violence. Our hearts and prayers are with the families of those killed and with the injured of body and mind.

As condemnation filled our televisions and social media feeds, it was alarming to see defamatory rhetoric pushing shaky lines of hard-won peaceful coexistence back to the stone age of prejudice.

In the aftermath, heated divisiveness plays the blame game.

All hearts and minds need to understand that we are all equally beloved of God, whether we are pink, purple, black, green or blue (or red-headed, like this white chick.)

All white people did not do this. Extremists did.

It’s hard in the face of intense hatred to look past our fear and mistrust, but we must.

We’re all part of this human family.

Working in the Middle East in the 1990s, I experienced hatred up close in the Palestinian city of Hebron where extremist Jewish settlers made life difficult for the civilian population. At the behest of the Hebron mayor, the international Christian Peacemaker Teams served as a non-violent buffer protecting local families. After a young American Mennonite member was severely beaten by settlers, the next Saturday a diverse group of us joined the CPT-ers  – including Rabbis for Human Rights, international NGO representatives (like me), and a Jewish survivor of the Holocaust.

Jewish, Muslim, Christian, atheist, Israeli, Palestinian, and internationals from all over, we stood together while armed extremist settlers spewed venom at us. I’ve never experienced such ugly unadulterated hatred as from their hurled slurs, shouts, gestures and threats.

It was easy to be scared, but standing together against hate our disparate hands and hearts were interwoven with a unifying belief in equality and the equitable worth of despotized people(s.)

No one was beaten or harmed that day.

Later that day we passed by the Israeli settlement of Kiryat Arba to see the shrine-like memorial erected for Baruch Goldstein, an Israeli doctor who attacked Muslim worshipers at the Ibrahimi Mosque in Hebron, killing 29 and injuring 125 before he was killed. The Holocaust survivor with us refused to look. He said, “I’m not the only survivor of my entire family to witness this travesty honoring a mass murderer.”

Baruch Goldstein was an extremist. Those settlers were Kach extremists.

We were there together with Israelis who chose to stand up for others, who were horrified by the actions of these extremists.

I get it that there are times to stand against systems of injustice (like I stood between uzi-toting soldiers and Palestinian children in Gaza, and at the same time decried Palestinian extremists blowing up Israeli civilians.) Although I worked in the Palestinian context, I also had Israeli friends who risked their lives documenting human rights abuses. Others, like a beautiful friend from Netanya who crossed challenging checkpoints to stay with me in Bethlehem, built bridges of hope through reconciliation initiatives.

After working there, later documenting mass graves in the Kosovo relief program, traipsing around Bosnia and Croatia, seeing East Timor recovering from injustice to freedom, working with Congolese refugees in Tanzania (& so on) I have developed a simplistic view. There are courageous people standing against extremists all over this globe. There are hope-filled, peace loving Palestinians, Israelis, Albanians, Bosnians, Croatians, Serbs, East Timorese, Indonesians, Congolese… (there are also extremist Palestinians, Israelis, Serbs, Indonesians, et all.)

What does all this have to do with Charlottesville, VA?

“The acts of a few are not representative of the many.” Those white extremists do NOT represent this white chick. Not now, not EVER. Nor my family, nor my friends of diverse ethnicities, orientations and religions.

Let’s counter our fears and acts of extremism by building bridges of peace, one step of understanding at a time, not letting acts of a few shutter our hearts to the value each of us inherently have as human beings.

The Rotunda @ The University of Virginia

To the people of Charlottesville and the great commonwealth of Virginia, to people of hope and action all over our country and around our whacked out world, we need to put our hearts and hands together to STAND AGAINST extremists, bigotry, racism, hatred and violence.

Let our hearts stand up for love (and our knees, even if a little wobbly.)

Let’s stand up for peace, dignity and equality of all with love from Above. Not some more than others, but all molded as uniquely crafted works of our Creator, equally precious in every shade and hue.

Let’s open our hearts and minds to encounter everyone equally as beings beloved of God.

Let’s STAND AGAINST HATRED in CHARLOTTESVILLE and EVERYWHERE!

20 Responses to Charlottesville: Standing Against Hatred