Here we are, another Friday in Lent. Easter is OTW (two weeks to go?) There’s not much time left to cram what we planned (hoped? contrived?) to accomplish during this penitential season.

Those three thick tomes I hoped to read? Not opened, yet. Those optimistically engendered spiritual goals for each day, uh, made once a week vs. daily?

Maybe it’s not going quite as I planned (or you, too.)

Maybe there’s been a tumble or bumbling stumble from the narrow Lenten path of observance, perhaps unintentionally?

That’s me. Maybe I intentionally did something off my Lenten grooves, but forgot it was Friday so unintentionally tumbled on two levels.

Monticello (on a blustery Friday!)

Two weeks ago as my brother and I traipsed around wind-blown Monticello (Thomas Jefferson’s home on a hilltop near Charlottesville, VA) we sought refuge in the lovely café there for lunch. Since this was my brother’s birthday celebratory trip (a short 5-day version vs. last year’s mammoth 3-week road trip) I convinced him to try a piece of the blueberry mascarpone cake that I had sampled with my uncle there last year. (Aroma’s, a local coffee shop, also makes this yummy not-too-sweet cake with huge blueberries and Italian mascarpone cheese.)

See the first stumble? CHEESE. I knew the cake had cheese in it, something not on the vegan diet. While traveling I don’t hyperventilate about cheese, especially visiting southern towns where it can be hard to find something vegetarian on menus.

No big deal – BUT – I gave up desserts for Lent.

When my brother filled up on his big sandwich, he said, “Ginny, you gotta help me eat this cake, it’s a shame to waste it.” Shame. Shame. Shame. I did help (eagerly) and didn’t feel much shame ‘til afterwards when I realized IT WAS FRIDAY!

Not only did I fall down on one of my observances, but as a vegetarian Lenten Fridays of abstinence mean I try to not have treats (of any sort) to make it mean something? Cake does not qualify as bare sustenance Friday fare.

Double stumble, tumble, splat. We were traipsing around Charlottesville and environs to celebrate, so I had to pick myself up and keep going (after a few mercy prayers.)

New day: healthy hummus for me & cream cheese for brother

I hadn’t blown it all Lent, turning down delectable desserts left and right (my brother likes sweets.)  But, ‘ya know what? Each day God’s mercies fall fresh on me (ahd you.) The next day was filled with new opportunities to stay the course (by not eating the dessert course), and the next day, and the next…

Even when Dwight ordered my favorite cheesecake at Cheesecake Factory in Richmond, I was able to let him enjoy every bite!

Sometimes when we fall into failure, it’s about more than cake. Most times we don’t intentionally fail, but it happens. It’s part of life. It may sneak up on us like eating cake on a Lenten Friday (realizing after the fact we’ve made a mistake.) Or, it might be something altogether more spectacular when we set out to do something and things drastically don’t turn out as we planned.

Falling down, though, the point is to get back up. Think of Jesus on the Via Dolorosa carrying His heavy cross. Whipped, bruised, battered – He fell down, but kept on going.

“Yes, failure is painful, but without pain there is no living in love. So then, go through the arches of Christ’s pain and enter into the joy of His heart. In the process, there will be many times you will fail. You will fall down flat on your face – even as He did on the way to the Cross. Unite yourself with Him and his passion and keep on going.”  Catherine Doherty 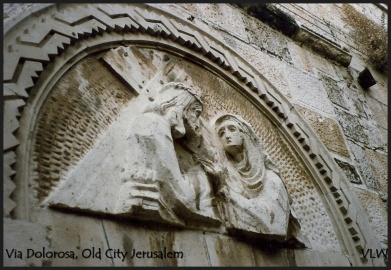 “Christ is the way that leads us, the truth that strengthens us, and the life that restores us to life in Him.”  Saint Ambrose