Although we usually commemorate Epiphany on 06 January, this year we are celebrating it on a Sunday – today. Epiphany marks the journey of wise men from the East who traveled far following a star to meet the Christ-child in Bethlehem.

A good question to contemplate this New Year: what sort of stars are we following? Are we letting stars of faith draw us closer to Jesus? 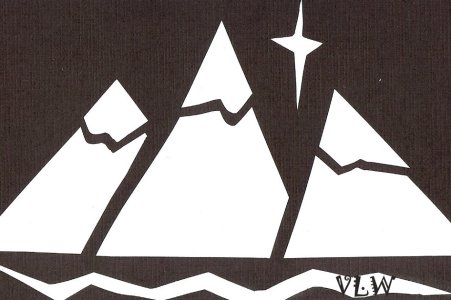 One of my favorite stars of faith is Catherine de Hueck Doherty (1896-1985.) My tattered copy of her daily devotional, “Grace in Every Season,” has been a treasured spiritual guide for over 20 years.

A woman of deep faith, Catherine Doherty was born into the aristocracy of czarist Russia. Commended for her heroic service as a nurse on the front lines during World War I, she later escaped Bolshevik Russia and landed penniless as a refugee in Canada with her ill husband and small son. Working her way up from a maid to an executive to provide for her family, she regained her lost wealth – only to give it away to the poor as she went to live and work in the slums of Toronto and later Harlem.

Outspoken as a Civil Rights activist Catherine was often threatened, but her faith in the Gospel of Jesus Christ shone brightly for all to see along with His Love that touched all.

A Christmastime custom in the Russia of Catherine’s youth involved putting an ornamental star over homes to represent the star that led the Magi. Here’s a quote about how the Magi following the star relates to us today:

“The star is always before us. We only have to open our eyes to see the star… Are we going to follow it or are we going to waste a lifetime catching stars that are not there? If we really go and follow that star, that one and only star, we will become a star and others will follow us, to that immense star, Christ. And then, we will become a flame, for the star is fire and flame and beauty and love, faith and hope.  And at that moment… we are enveloped by the Spirit and we, ourselves, have become a prayer.  Then you will walk, and I will walk, in the revelation of His infinite love that surrounds us and reveals itself wherever we go.” Catherine de Hueck Doherty (Grace in Every Season)

13 Responses to #EPIPHANY STARS OF FAITH